Most little children have their first experience with money when they receive a piggy bank. It’s a good way to show your children that if they save their 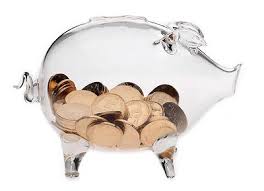 money, that it adds up to more money over time. But the problem with most piggy banks is that you can’t see the money inside it, and thus can’t see it growing. A better idea is to find your child a clear piggy bank so they can see the money they are accumulating. And it doesn’t actually have to be a piggy bank, it can be any sort of clear plastic container.

The first lesson you want them to learn is that any coin they find, in the car, in the couch cushion, on the sidewalk, in a drawer, can all be added to their “bank”. And that over time, the more they add and don’t spend, the higher the pile of coins in the piggy bank gets – and that’s called saving money.

Once they have enough coins in their piggy bank, the next lesson they can learn is that not all coins are the same. Have them empty out their bank and sort the coins into piles. Show them what a penny, a nickel, a dime, and a quarter look like. Talk about the colors of the coins. Talk about the pictures and the words and the numbers on the front and back of each coin. Then have them sort all those coins into different piles.

Then calculate all the pile totals together and let them know how much money they have in total so far saved in their bank. Talk to them about what item, that they are familiar with, would be equivalent in cost to the amount that they have saved. You want to have them understand 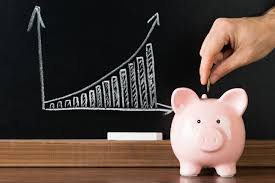 that money has value and you can exchange money for items that you want to buy. Even though they may not have much money yet in their bank, get them excited for what they could get with their money. Or help them think about what they might want to save that money for, if they don’t have enough yet, but want to continue adding to it. Congratulate them on collecting and saving this money. Explain to them that you, too, save money in a different type of bank but that it is similar to them saving their coins in their piggy bank. Plan a trip to take them to see the bank where you keep your money.